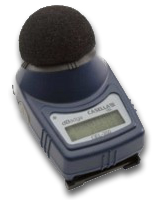 The very popular dBadge Noise Dosimeter is now available with Intrinsically Safe approval for use in hazardous and explosive atmospheres, such as mining, oil refineries and other manufacturing facilities.